For a long time I have loved the saying that “Luck is when Preparation meets Opportunity.” I have spent years, even the past 2 decades working and creating the “preparation” for a filmmaking career. One that is the essence of my being and I have committed everything from my life to making that career a viable and sustaining one to the extent that I have sacrificed a lot and continued in poverty struggling to make this and my life work! And for the past 15 years, since my accident and becoming a paraplegic, it has been not only for myself but also for the 56+ million Americans, and the additional 600 million world-wide (according to the U.N.) with a disAbility to create what Hollywood refuses to do – provide an authentic voice and fictional heroes of those with a disAbility in movies and television.

At first, I thought all I had to do was make the best preparation possible. And then when opportunity came by – BAM – luck would finally be with me! That preparation had to constantly grow – from just a screenplay, to additional screenplays and short stories, to creating a production company and the company documents that support it such as the business plans (for the company and for the company’s company to raise the funds for the individual film production) which have been written and re-written several times and has been extremely difficult. It is even more challenging than for a standard independent film or production company because I have to describe what it is that I do, which is different from most all of Hollywood, why I can do what they do not do, and how it can be done correctly as well as how it can be successful, not only commercially at the box office, but also critically, and socially without offending the very group my films represent. The latter being one of the many reasons why Hollywood has shied away from fair and equal representation of those with a disAbility in movies and television despite that we represent the largest and fastest growing minority in America.

If At First You Don’t Succeed – Prepare More!

All this preparation, the work, dedication, passion, cannot wait on the opportunity to just happen, so I had to work at creating the opportunity or at least prepare the grounds for an opportunity to see what it is that I have been doing! I created the website – I knew nothing of how to do html or work with html editors like Dreamweaver or FrontPage, but also, as I mentioned above, without money I couldn’t pay someone to do it for me, and even worse, I couldn’t even afford to buy Dreamweaver or FrontPage. And on top of all of this I couldn’t find the government or private services that serve the disAbled that would buy or provide the funds for a business such as banks, Small Business Administration, venture capitalists, grant foundations, etc.  – even for a business owned and operated by a minority, a disAbled man, I couldn’t get very far, often not even able to present the business plan because as soon as they read or I said it was for a “movie business” – so I could make a movie – or even making it as official as possible by saying this is “motion picture and television production company business” with emphasis on how this would offer a greater good by representing those with a disAbility who are not only underserved, but most often dismissed, ignored, discriminated against and finally create a film that those with a disAbility are extremely hungry for – they all said, “Larry, that sounds like a really good cause” but regardless of how much more I was able to say, even compelling evidence of what I am saying is supported by research and common sense, it always ended up with “good luck with it.”

When Opportunity Doesn’t Present Itself – Create It

These traditional methods were not working so I had to take it directly to Hollywood. I contacted several well known producers, directors, celebrities, production companies, former and current studio executives – looking for help in a very worthy cause – but most of the time I was lucky just to get their assistant to listen to what I had to say. Most of the time the responses I heard were with familiar terms like “unsolicited material” – even when it was just my company working for this worthy cause – must be submitted by an “agent” or “entertainment attorney”. Some were kind in their responses of declining to find out more info on my cause and project, but others like the Imagine Entertainment assistant from hell to Brian Grazer 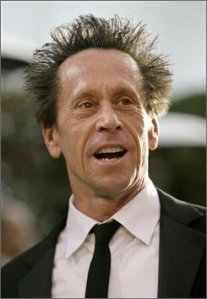 whom I think is a brilliant producer and the reason why I tried to contact as I thought would be a great partner to help me make this into a great success, who would understand and feel for this cause of not only underserved but actually documented industry discriminated voices and representations of those with a disAbility and then run with it, but this assistant from hell told me when I called to follow up on the letter I faxed to him, in an incredibly rude manner and borderline hateful tone, she confirmed he did get my letter and stated if he is interested he will contact me and then making it very clear by repeating it twice to “never call here again” – even though it was my first (and now only) phone call (after only two letters sent) and I was nothing but respectful in tone and content.

Or what about creating an opportunity by presenting Mr. Hollywood, Tom Cruise with my work and saying forget the past – focus on the future – and what better way then to have an actor – able bodied actor who played one of the most famous paraplegic roles in movies to help me produce the historic “turning point” in American cinema for those who are paraplegics! But I never got a live person, assistant, secretary, and never a response from any of the letters, or voice mail messages I left. 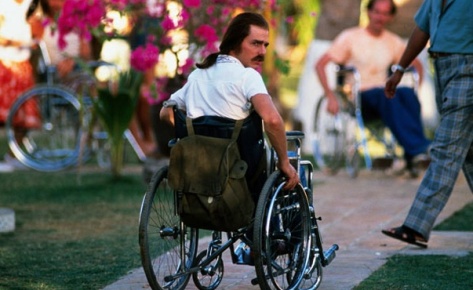 Soooooooo, what about the opportunity with Mr. Box Office, Academy Award winning writer, director, and self proclaimed “king of the world” after announcing his first feature film since the epic Award winning “Titanic” whose featured character in his “Avatar” would be a paraplegic war veteran and the only “able bodied” segments of that paraplegic character would be all computer generated! And as it turns out, Cameron did not use the common Hollywood excuse of hiring an A-List actor for the role. Perfect for a paraplegic actor – an authentic portrayal and representation! But as most readers of this blog know how that turned out over two and a half years of attempting to contact James Cameron who obviously feels similar to the only one to respond to me in a phone call I made in early 2008, a representative from his production company that said this issue is really no big deal. And despite several more attempts at contact from then up until just a month before the premiere of “Avatar” and going from simply asking questions about his auditioning for that paraplegic role that he cast an unknown but able bodied actor Sam Worthington – to offering a mutual supporting proposal in which I would come out and support “Avatar” in return for his admitting that he did not know how significant this issue is to those of us who are paraplegics or with a disAbility that can represent themselves at the time he cast Worthington in that role for “Avatar” and is now supporting the authentic work of mine in Abilities United Productions and our first feature film “London Time”! But never a single moment of recognition from Cameron! I guess we are not even worthy of acknowledgment from the king of the world!

These are all only a small percentage of those I attempted to contact. I have an Excel database of contacts that also documents the time and date when and how I attempted to contact and if any response that was given. It has over 100 Hollywood players and makers although up until this month (May 2010) none were contacted to portray a character in my “London Time” feature film. And many of them were attempted several times – in different formats, ie: phone calls, letters, faxes, etc. but unfortunately, the responses I have described above were more than just highlights, they are actually the majority of the responses! The latest from the first asked to portray the female leading character, Marci Waters, opposite our homicide detective and paraplegic character that will be portrayed by a currently uncast actor who is also a paraplegic – whose agent said that this actress has “declined to pursue the project.” But at least she was decent enough to give me a response! The overwhelming majority will not even do that. In some ways I think it is easier for them to say they never heard of me, my mission, the cause, my production company, or my feature film, which is a lot easier than to say they rejected such a worthy cause and instead decided to just perpetuate the Hollywood standard of stereotypes and discrimination.

These are the results I have been getting for the past several years. I have tried many different ways, from the simplest like colored envelopes, unique letterheads, to creating entire web pages exclusively for them to explain what this is all about, or organizing the protests (but didn’t want any negative publicity and therefore decided not to pursue) or attending film festivals to get closer, befriend on MySpace (when it was the social network) to Facebook, and Twitter to create the “opportunity” that would at least get these Hollywood players and makers’ attention to this cause and solution that I have “prepared.”

Which I have been doing for nearly 20 years but I wonder how much greater the sacrifice will be before victory and if I will make it! Honestly, the resolution in my heart is strong but my body and my head are tired and growing weaker with every attempt. When I began this journey I announced that I will take this fight to my death and it was a bold proclamation that was easy to say but the older I get the years of not succeeding – the more I realize that it could be a reality and I might die before this “preparation”, work, passion, dedication, and sacrifice becomes a reality, a dream come true, where an authentic voice, vision, performance, and overall representation of paraplegics and those with a disAbility who can represent themselves in movies and television happen and we get the same respect, the same fair and equal opportunity to tell our stories, to create our own heroes – to be represented by those who actually know what this life with a disAbility is like in all of its glory and pain! To empower not only those of us working in the movie business (or trying despite the discrimination) but a real empowering to the audience members who look up on the screen from their own wheelchair and see an actor who lives from a wheelchair – portraying a character that was written and then directed by a person who lives from a wheelchair! Which not only says that he understands and can honestly relate – but that he can be anything he wants despite what society believes are his restrictions. He or she can be a Hollywood star, or be like that character in the movie, be the John McLane of “Die Hard” in a wheelchair – just like Detective London in my “London Time” film project! Chances are he or she will not become that person but man, what a dream that would be and inclusion at the water cooler on Monday! Can you imagine? I can, but it is still a dream in a dream!

McCartney & Wings – “With A Little Luck”!